Global markets rallied in November. A historic US election played out as one of Wall Street’s best-case scenarios.  Three effective Covid-19 vaccines were announced over the month, which further stocked investor enthusiasm. Third-quarter earnings season continued to show better than expected results, and economic data showed some progress on the labor front.

Value-oriented equity issues along with small-caps and cyclical sectors led the gains in November.  Value equities were up 15.1%, Small-caps gained 15.4%, and the energy sector ripped over 30% higher.  The S&P 500 increased by 10.75%, the Dow rose 11.5%, the NASDAQ tacked on 11.8%, and the small/midcap focused Russell 2000 increased an impressive 18.29%.  International developed and emerging markets also posted nice gains of 12.8% and 9.3%, respectively. 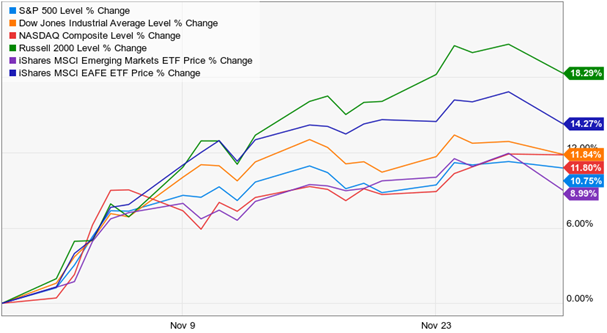 The US Treasury curve was little changed for the month.  The 2-year note yield lost one basis point to close at 0.14%.  The 10-year bond yield decreased by two basis points, closing at 0.84%.  Global investment-grade bonds gained 3.1% for the month while US high yield returned 4%.  Emerging market bonds increased a respectable 3.7%.

Gold prices fell throughout the month, posting a $127.30 or 6.6% decline to close at 1908.60.  The risk-on appetite, coupled with the notion that Bitcoin could be taking market share away from gold as a hedge against inflation, most likely dampened demand for the commodity over the month.  Interestingly, Bitcoin rallied sharply over the month and closed above $19,000.  Oil prices were materially higher over the month on renewed hopes for the global economy. WTI increased by 27% or $9.67 to close at $45.37 a barrel.  Of note, OPEC is meeting in the first week of December to calibrate production plans.  As usual, there appears to be a meaningful amount of dissent in what the appropriate production levels should be, and Oil could likely trade lower on an impasse. 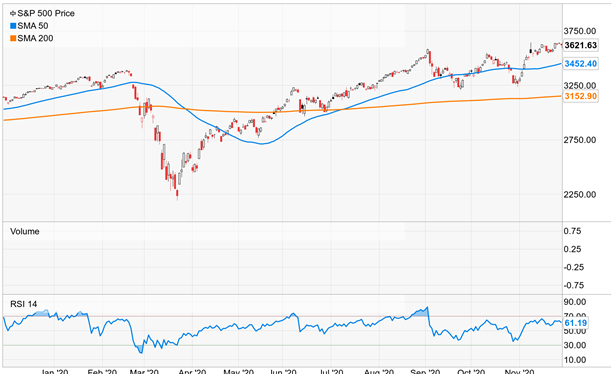 The US election in 2020 was indeed historical, with a record number of Americans getting out to vote.  Despite numerous legal efforts by President Trump’s camp, it appears certain that Joe Biden will be the next President of the United States.  In the lower house of Congress, Republicans picked up seats, but the Democrats retained the majority.  The Senate will likely remain in the control of Republicans, but a runoff of 2 Senate seats in Georgia has the possibility to alter that outcome.  Wall Street embraced the results.  A divided congress likely means no change to the tax code and that the Senate will continue to temper democrat’ fiscal spending policies.  That said, a Biden administration is likely to extend an olive branch to many global leaders and try to mend some of the diplomatic ties that have been strained.  Additionally, Biden will likely rejoin the Paris Accord to combat global warming and, in turn, implement several environmental policies and initiatives.

Over the month, three Covid-19 vaccines were reported to have shown promising results.  Pfizer’s and BioNTech’s candidate was the first to be showcased with an efficacy of 90%.  The FDA will meet with the companies on December 10 to go over the results and decide on emergency use approval.   The vaccine is similar to Moderna’s candidate in that it needs to be stored at very low temperatures, which adds another variable to logistics.  Moderna’s vaccine showed 94% efficacy, and the company is scheduled to be in front of the FDA on December 14t.  Finally, the Astra Zeneca/Oxford vaccine had solid results showing 70% efficacy in one cohort and 90% in another.  The company apparently had some problems with manufacturing that altered the dosing in the trial.  None the less it is also earmarked for review in front of the FDA in the coming weeks.   The news of the vaccine is precisely what the market needed, and investors applauded human ingenuity.  It provides a “light at the end of the tunnel.”  No doubt that there are still numerous logistical hurdles to get over before we get the virus under control.  Currently, the rate of infection is increasing materially in several geographies.  Europe has imposed national lockdown mandates after local mandates failed.  The lockdowns are dampening economic activity but seem to be curbing the infection rate.  In the US, spikes in infections have caused numerous states to impose new lockdown measures.  Thanksgiving travel was 40% of what it was last year, yet 6 million passengers passed through airports despite warnings from the CDC and NIH.   Again, further lockdown initiatives are likely to hinder economic activity in the near term, but markets are forward-looking and hopeful the upcoming inoculations will win the day.

Third-quarter earnings continued to impress in November.  According to Factset, S&P 500 earnings would have been positive if three sectors were removed.  Energy, Airlines, and the Hotel and Leisure sectors caused the drag.  Interestingly, all three sectors did quite well in November.  Economic data continued to be mixed.  Manufacturing and Services data were better than expected.  Housing continued to be a source of strength, with existing home sales, building permits, and housing starts all showing better than expected results.  The first two weeks of high frequency data on initial claims and continuing claims painted a better picture only to regress in the final two weeks.  The October reading of the unemployment rate fell to 6.9%, which was also encouraging.  Sentiment data fell as consumer sentiment, and consumer confidence declined from prior levels, most likely due to the spike in coronavirus infections and the prospects for further lockdowns.

The information in this Market Commentary is for general informational and educational purposes only. Unless otherwise stated, all information and opinion contained in these materials were produced by Foundations Investment Advisers, LLC (“FIA”) and other publicly available sources believed to be accurate and reliable.  No representations are made by FIA or its affiliates as to the informational accuracy or completeness.  All information or ideas provided should be discussed in detail with an advisor, accountant or legal counsel prior to implementation. No party, including but not limited to, FIA and its affiliates, assumes liability for any loss or damage resulting from errors or omissions or reliance on or use of this material.

The views and opinions expressed are those of the authors do not necessarily reflect the official policy or position of FIA or its affiliates.  Information presented is believed to be current, but may change at any time and without notice.  It should not be viewed as personalized investment advice. All expressions of opinion reflect the judgment of the authors on the date of publication and may change in response to market conditions. Due to rapidly changing market conditions and the complexity of investment decisions, supplemental information and other sources may be required to make informed investment decisions based on your individual investment objectives and suitability specifications. You should consult with a professional advisor before implementing any strategies discussed. Content should not be viewed as an offer to buy or sell any of the securities mentioned or as legal or tax advice. You should always consult an attorney or tax professional regarding your specific legal or tax situation. Investment advisory services are offered through Foundations Investment Advisors, LLC, an SEC registered investment adviser.