US financial markets rallied in December in volatile trade. It seemed markets would take two steps forward in one week only to give up a step in the following week.

The emergence of the Omicron variant rattled markets initially, but investors were encouraged from reports that the variant, while more infectious, produced less severe illness. News that our current vaccination regimes are effective also helped sentiment. The Biden administration announced no new lockdown measures in the US and induced FEMA into action where needed. The President also announced that there would be 10,000 new vaccination sites opened across the country and that the government had procured half a billion rapid Covid tests that it would make available to citizens. All that said, the highly contagious variant did cause disruptions in travel and lead some employers to extend the timeline for work at home initiatives and has likely disrupted parts of the supply chain.

Global central bank policy announced in December showed policy divergence across the globe. The December FOMC meeting will likely be seen as an inflection point in US monetary policy and exemplified by the Fed Chairs’ contention that we should stop using the word transitory when describing the current inflation environment. The more hawkish tone has come off the back of historic inflation that has been more persistent than most had predicted. The Fed announced that it would increase the pace of its taper to $30 billion a month and would wrap up its asset purchase program by the end of March 2022. The Fed did not change its policy rate but did telegraph its projections for three rate hikes in 2022. The US Treasury market sold off on the news, with the front end of the curve taking the brunt of the sell-off. The Bank of England surprised the markets with an increase in its policy rate. The ECB and BOJ announced that they would also taper their asset purchasing plans, but their tapers would like to run into 2023. Interestingly, the PBOC is moving in the opposite direction, easing policy to stimulate economic growth. 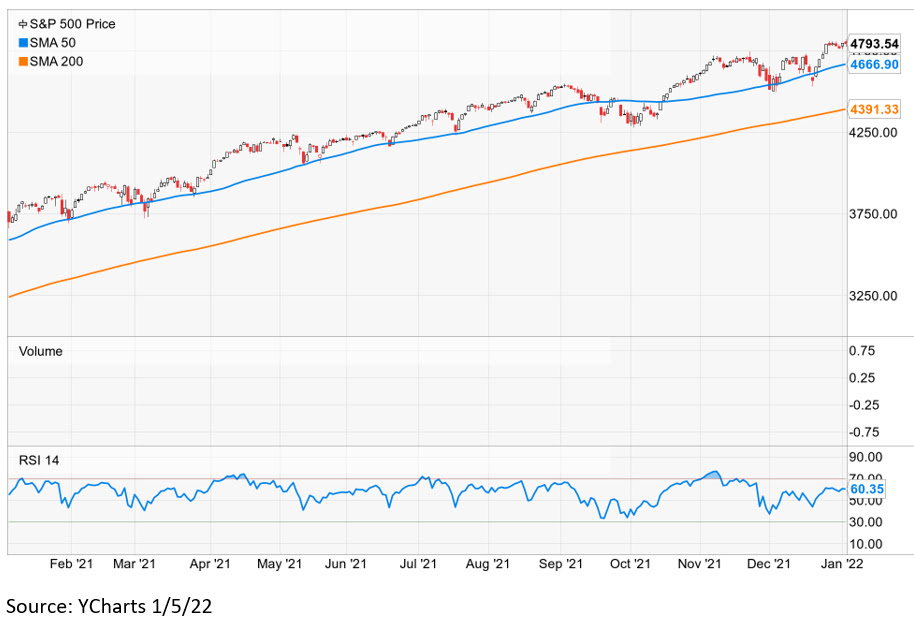 Economic data in December was mixed. On the labor front, high-frequency data on Initial Claims and Continuing Claims continued to improve. However, the November Employment Situation report was underwhelming. The report showed an increase of 210k non-farm payrolls, much less than the anticipated 545k. Private payrolls also missed the mark at 235k versus the consensus estimate of 500k. The Unemployment rate fell to 4.2% from 4.6%, and Average Hourly earnings increased by 0.3%, lower than the prior increase of 0.4%. Inflation readings continued to be red hot. The CPI increased by .8% on a month-over-month basis and was up 6.8% over the prior year, the largest annual increase since 1982. Headline PPI increased by 9.6% year-over-year. ISM Manufacturing and Services data continued to show economic expansion. Retail Sales were a bit of a disappointment but likely came in short due to holiday demand being pulled forward on supply chain concerns. The housing market continued to show strength, and Consumer Sentiment rose in December.